In the steam mains, a part of the steam loses latent heat by heat radiation and is condensed, and to remove this condensate, several condensate discharge lines (branch lines) are often installed at intervals of 30m to 50m.

However, unlike the examples of the device described below, it is difficult to remove all the condensate since high-speed flowing condensate which is being pulled by high-speed steam and is moving, must be captured in the middle of it. Most of condensate generally occurred in the steam main line is in very small amounts, so a small diameter condensate discharge line is used. For this reason, where the condensate discharge line is connected to the steam main, it is recommended to set up a condensate collection pocket, as shown in Figure 4.1 nstalled as a means to increase the capture efficiency. 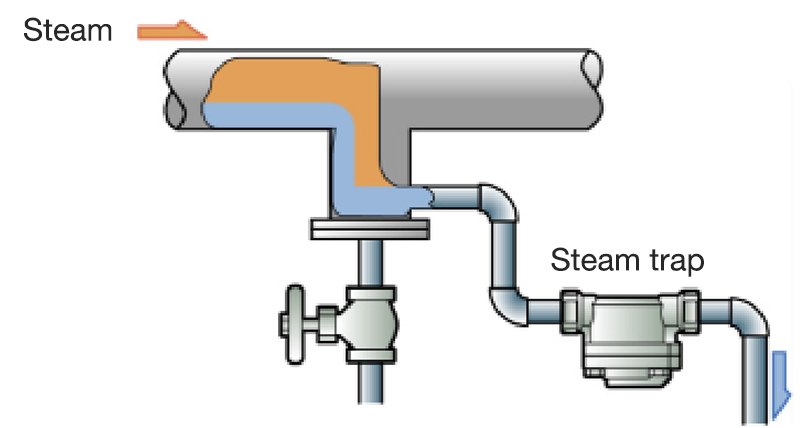 Individual trapping refers to the trapping system where one steam trap is installed in each condensate discharge path, as shown in Figure 4.2. 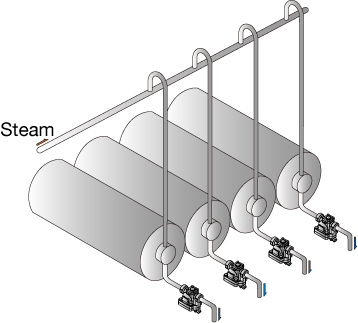 In contrast, trapping in which the discharge paths of multiple units are connected to a single steam trap is installed in the common condensate discharged line and is called group trapping. (Figure 4.3) 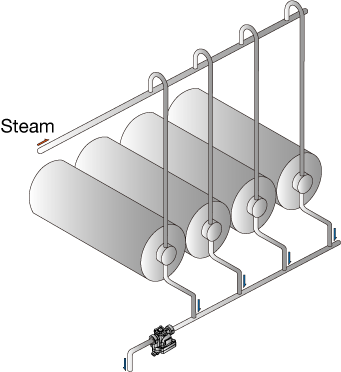 Group trapping is often introduced in steam trapping courses as a typical example of improper trapping. The problems caused by group trapping are shown in Figure 4.4 and 4.5.

Figure 4.5 Equipment under the same pressure

Figure 4.5 shows the case where equipment is used at the same pressure with each other. It is assumed that equipment B is under normal operation, and the inside of equipment reaches the predefined temperature. If equipment A is started in this condition, it will produce much more condensate than equipment B because it is cooler inside. As more steam condenses, the pressure drops, which causes steam to flow in from equipment B. Equipment A will have to resist this steam and discharge condensate.

Thus, group trapping can prevent condensate from discharging smoothly, and negatively affect equipment performance. This configuration requires fewer steam traps, but this is caused by a lack of awareness of steam trapping. It is important to have a new understanding of the validity of individual trapping.

The reason to use the water seal is as follows.

On the other hand, if there is no water seal, when the steam in the start-up line condenses and the pressure drops, new steam enters the start-up line before the condensate. The amount of condensate increases, and the condensate discharge waits until the steam in the tube condenses. In this way, temporary steam locking is always caused when steam trap opens in the line, but if there is a water seal, it will be unlocked in a short period of time. If the diameter of the rising line can be further reduced, the unlocking time will be further shortened. 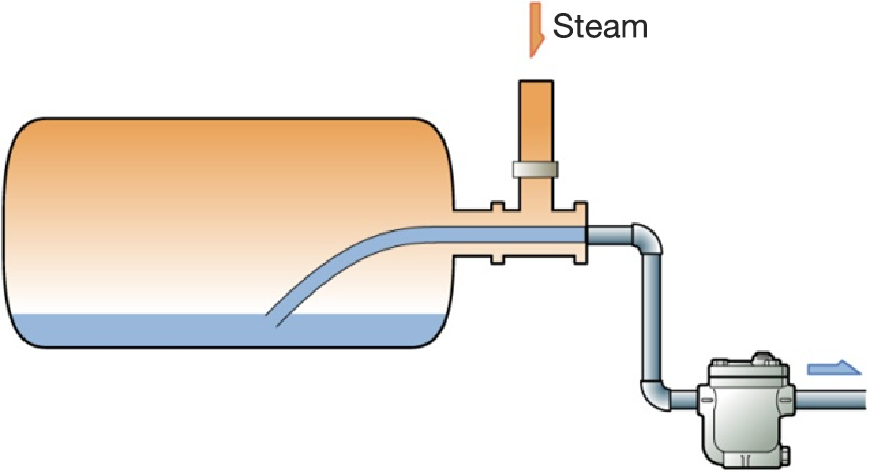 Steam traps have various models and features.
Suitable steam traps can be selected when it is determined whether each feature suits the condition of use.